Melt butter in large shallow straight-sided oven-safe pan, such as cast iron 3.5 or 4-quart braiser. Add onion and cook just until soft. Add garlic and stir until combined. Stir rice into pot and sauté for one minute. Gradually stir in 2 cups milk, followed by chicken broth. Bring up to a low simmer, stir and cover with lid, stirring occasionally to ensure it doesn’t stick or boil over, about 15 minutes, adding additional 1/2 cup of milk if needed. Once rice mixture is cooked, stir in shredded chicken, broccoli florets and seasoning until well combined. Add in half of the cheese and stir until melted. Remove from heat and top with remaining cheese. Place pan in oven and broil for about 5 minutes or until cheese is bubbly and melted. Serve immediately. 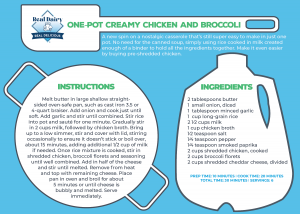